Searching for Night in a World of Shifting Baselines: Land Recycling and Light Pollution

We know what the solution would look like. It doesn’t require…digging up billions of tons of contaminated soil and transporting it for cleansing. Replace or remove a poor light fixture and the light pollution it made disappears—at the speed of light. It’s really very simple.
Christian Luginbuhl, Naval Astronomer

International Dark Sky Week is March 31st to April 7th. It’s appropriate that International Dark Sky Week overlaps with National Public Health Week, since light pollution and health are intimately linked. Light pollution is an especially important topic for land recyclers, because each redevelopment project offers a chance to start fresh, and that includes the way we illuminate our world.

In 1941, the Works Progress Administration invited Woody Guthrie to journey to the Columbia River in Washington State to record a series of songs, several of which were about the Grand Coulee Dam. I harbor a personal connection to these songs: my great grandfather worked on the dam, and raised his family in a tar paper shack in a dam workers’ camp. My grandmother used to talk about lighting the family’s kerosene lantern at night to finish her school work. Electric lighting was rare, especially in rural areas.

How appropriate, then, that during his time on the Columbia, Guthrie penned the song “End of My Line”:

‘We got a hold of a piece of land,
Fifteen miles from the Coulee Dam.
Now the Coulee Dam is a sight to see,
Makes this e-lec-a-tric-i-tee
‘Lectric lights is mighty fine,
If you’re hooked on to the power line
…
No, there ain’t no country worth a dime,
If I’m just a mile from the end o’ the line.’

In 1941, many American homes had no electric lighting, and as Guthrie tells us, access to power was dependent on massive national electrification projects that were extending power lines mile by mile.

Fast forward to 2019. We live in a world addicted to artificial light, and the International Dark-Sky Association (IDA) estimates that at least 30% of all outdoor artificial lighting in the U.S. is wasted – beamed into the sky or reflected off the ground (other experts put this figure at 50%). This light does not further its intended purposes: it simply bounces into space, creating negative consequences along the way.

Our choices about lighting reveal that as a species, we are deeply afraid of the dark. IDA estimates that between one half and two-thirds of Americans and Europeans no longer live in a place where they can see the Milky Way. According to the World Atlas of Artificial Night Sky Brightness, created in 2001, two-thirds of the earth’s population, including 99% of people in the continental U.S. and Western Europe, no longer experience a night untouched by electric light—a truly dark night. Indeed, some question whether true darkness still exists at all in the continental U.S. There is hope, however: like urban sprawl, light pollution is not inevitable. By using resources more wisely—remediating and redeveloping existing urban land, and reducing and shielding outdoor artificial light—cities can grow more sustainably.

Think about the last time you saw a truly dark night sky. How did it make you feel? For me, it was during the summer of 2010, when I was working in the South Pacific island nation of Vanuatu. I took a weekend trip to a small island not far from the capital, Port Vila. When darkness fell, I looked up and saw a sky drenched with stars. The sheer number of stars, and the light they generated, was unbelievable. Even in some of the darkest places in the US, like Great Basin National Park or Death Valley, I haven’t seen anything remotely similar (sadly, the last time I was at Death Valley, a ranger pointed out that the glow of Las Vegas, 130 miles distant, was visible from the Park). What does it say about our experience of the built environment that a truly dark sky can shock?

Land recycling is about building better communities. But better compared to what? A recent New York Times article on “The Insect Apocalypse” pointed out that humans are subject to shifting baseline syndrome: as environmental degradation increases from one generation to the next, each new generation takes its current state as normal. The mass of insect life on planet Earth has decreased enormously over our lifetimes – by half in some places, 70% in others, and by 60 fold in still others. If fewer bugs feel normal to you, you won’t detect a decrease. It’s that simple.

Shifting baseline syndrome profoundly impacts our policy decisions. Light pollution is particularly illustrative of insidious shifting baselines. As Paul Bogard points out in The End of Night, “Could we jump from the dark of the 1930s (or 1950s, or even 1970s) to that of tonight, few of us would fail to be impressed by the dramatic increase in artificial light. But that increase has been gradual enough that it would be easy to imagine our nights are still as dark, or nearly so, as they ever were.”

Light pollution has real environmental consequences. It kills billions of birds, bats and other species each year. The brightest beam of light on earth emerges from the Luxor Casino in Las Vegas, which in turn is the brightest city on earth. Each night, the Luxor’s beam attracts clouds of birds and bats, who come from miles away to feast on the bug buffet that gathers in the light. They come so far and spend so much energy flying to and fro, that by the time they return to their young, they have nothing left to feed them. The Luxor’s beam is just one example, but this issue is widespread. Programs like the Fatal Light Awareness Program (FLAP), based in Toronto, provide tools to help cities globally reduce the death toll wrought by artificial light. 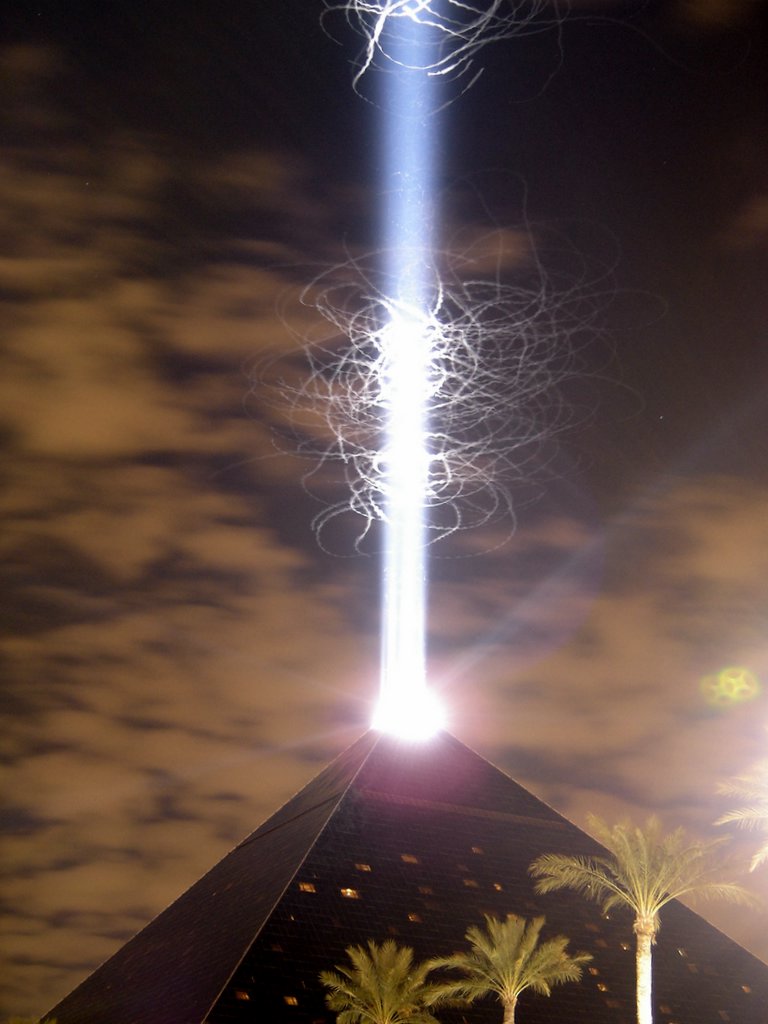 People suffer from light pollution, too. In her essay “Circadian Heart,” part of the collection Let There Be Night, Christina Robertson writes at length about the impact of artificial light on melatonin production. The body produces the hormone melatonin in response to darkness. Recent studies suggest a strong link between elevated rates of breast and ovarian cancer and decreased melatonin production. These studies estimate that two to three out of every seven women who work the graveyard shift will develop breast cancer. Light pollution can literally kill us.

But what about light and safety? Isn’t this our primary reason for lighting the night? Glare from unshielded security lights can actually blind a viewer and limit the ability to perceive threats. Poorly designed lighting also endangers drivers and pedestrians. As a lighting designer explains in The End of Night, as the eye becomes accustomed to light, people will always ask for more, but more doesn’t generate a feeling of safety. Contrary to what we might expect, some cities and towns have experienced drops in crime when they turned off lights after midnight. Police in Bristol, England, for example, recorded a 20% drop in crime after the city went on a midnight light diet.

Harder to measure but equally profound is the human and cultural impact of losing night. In Let There Be Night, contributor Anne Matthews points out that 30 years ago, dark skies existed within an hour’s drive of most major population centers. Today, you’d have to travel 150 miles or more to reach similar skies. I believe it: a few years ago, I drove 90 minutes out of Oakland to see the Perseid meteor showers. 90 minutes traveling at highway speeds, and it still wasn’t dark enough.

When so many of us don’t live beneath a truly dark night sky, we lose touch with its majesty. In the words of one author, we become isolated from night, and so do our children. Children born into a drought don’t miss rain, and children who live beneath hazy, light polluted skies don’t miss dark. It’s a case of shifting baselines: no rain and too much light seem normal if that’s what you know. This is why light pollution is such a critical, time-sensitive issue, and why land recycling has a role to play. Each land recycling project is an opportunity to improve our environment by bringing back night, whether we’re adaptively reusing existing structures, or remediating soil and groundwater and building from the ground up. We can evaluate our lighting codes, and educate our communities and electeds about dark sky ordinances and dark sky-friendly fixtures. We can set new aesthetic standards. In Let There Be Night, Flagstaff, Arizona gets a shout out for the way locals have embraced a darker sky as part of their civic identity. Local Mayors in Idaho have figured out that preserving dark skies can also generate economic development, as central Idaho’s dark sky reserve demonstrates.

I’m not arguing for an end to nighttime lighting, or a return to candles and torches. In many communities, artificial light makes people feel safe, and that is important, desirable and empowering. As a woman, my personal safety is never guaranteed, especially at night. Even if I don’t appreciate neighbors’ unshielded floodlights, I do appreciate well aimed, appropriately shielded street lights – they make my morning runs and evening walks feel safer, and when I’m on a bike, I want as much light as I can get—the Christmas tree is my spirit animal. My point is not that all artificial light is bad, but that too much artificial light is harmful, and that we’re already up to our retinas in its gauzy glow. Partially due to the very human impact of shifting baselines, our demand for artificial illumination has gotten away from us. If we rethink our use of light and learn more about alternatives, we can generate better outcomes for ourselves and our surroundings.

Ending light pollution is imminently achievable. We need to start using light sensibly and replace the lights we installed insensibly, by removing unnecessary illumination and using better fixtures. With these steps, we can end light pollution and achieve a better balance between night and light. Perfect for a land recycling audience, Naval astronomer Christian Luginbhul puts light pollution in perspective:

We know what the solution would look like. It doesn’t require…digging up billions of tons of contaminated soil and transporting it for cleansing. Replace or remove a poor light fixture and the light pollution it made disappears—at the speed of light. It’s really very simple.

As land recyclers, we already do the hard stuff. Ending light pollution is simple in comparison, and we are in a powerful position to reduce it by incorporating best practices for smart illumination into our redevelopment projects.

Celebrate International Dark Sky Week by getting outside and looking up, and start thinking about illumination differently, both around home and in your land recycling work. For more information and resources, check out the International Dark-Sky Association, and watch their short film, “Losing the Dark.”

For more about light pollution, I recommend the following books. If you’ve found others, please email me at [email protected] and share the wealth:
The End of Night: Searching for Darkness in an Age of Artificial Light, Paul Bogard (2013)
Let There Be Night: Testimony on Behalf of the Dark, edited by Paul Bogard (2008)
Fighting Light Pollution: Smart Lighting Solutions for Individuals and Communities, International Dark-Sky Association (2012)

Incidentally, Bogard’s most recent book looks like a winner for land recyclers. It’s called Dirt: From Our Oldest Cities to the Last Wilderness, What Dirt Tells Us About Who We Are. If you’ve read the book, let me know what you thought.