Not only are the folks at New Belgium Brewing Company the gifted brewers and creators of the delicious “Fat Tire” Ale, but they are also quite the environmentalists. When the Brewing Company began searching for a location for a second brewery in 2009, the Company established a set of criteria for their site, one of which was that the site had to be a brownfield. New Belgium purchased the 18-acre property in Asheville, North Carolina in 2012 and in May 2016, opened the doors to its second brewery.

For New Belgium, the Asheville property was a perfect fit. Asheville was ideal for brewing because it has a good source of clean water (the #1 ingredient in making beer — each liter of beer takes four liters of water to make, and New Belgium is actively trying to reduce this ratio), a strong brewing community, and the East Coast location cut shipping costs and the associated carbon footprint. New Belgium was excited to find an urban redevelopment opportunity in the heart of Asheville’s River Arts District and adjacent to the residential area of west Asheville, allowing staff to bike, walk and bus to work.

The site was formerly an industrial and agricultural hub for more than a century, having been developed for a variety of different uses throughout the years. In the 1800s, it was part of the Buncombe Turnpike, a footpath for agricultural trading between Asheville and Charleston, SC. In the early 1950s, it became home to the Western North Carolina Livestock Market, and the property became an informal community center. Throughout the 1900s, many families operated businesses alongside the Market, including an auction house, a transmission shop and a salvage yard. According to John Bell, one of the owners of Main Auto Parts salvage yard, local children went to college and families were raised on the revenues from this regional economic hub. A construction and demolition landfill was in use through the 1980s, which is now the Liquid Center / tasting room. When the site assessment was completed, New Belgium found some onsite contaminants including a small amount of lead-based paint, some petroleum, methane (from organic decomposition), asbestos containing materials and lots of construction landfill debris. 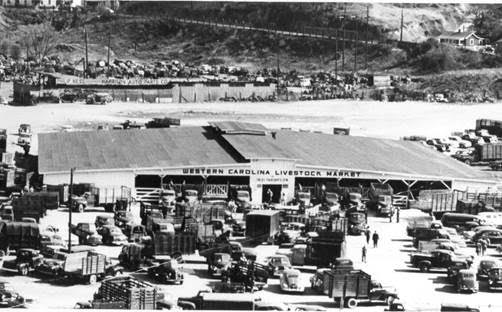 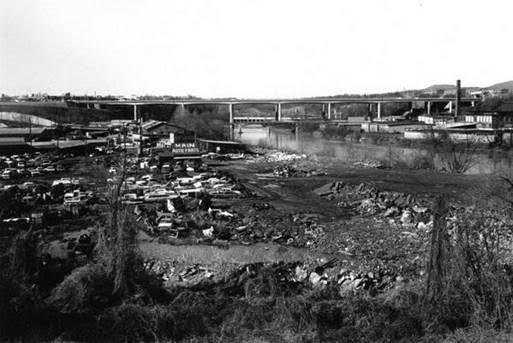 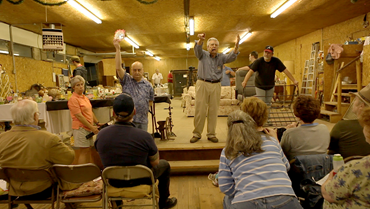 After more than a century of industrial use, the cleanup and redevelopment process for this site was bound to be long and complex. Luckily, New Belgium was committed to recycling the land and creating positive impacts that stretch far beyond the property line. Before redevelopment, the Asheville site was bisected by a neglected creek, essentially a ditch full of old tires and concrete rubble. The water disappeared underground in places and the stream banks were collapsing on both sides. In partnership with the City of Asheville, a local nonprofit RiverLink, and with a grant from the North Carolina Clean Water Management Trust Fund, New Belgium restored the stream and, with input from the community, named it Penland Creek in honor of the Penland family, which operated an auction house on the property for many years. The stream is now not only an attractive part of a functioning riparian habitat, but also a focal point of the brewery.  While restoring Penland Creek, New Belgium planted native riparian vegetation on the streambanks to prevent erosion, and adopted an Integrated Pest Management program where hardy, native species were selected for reintroduction. Throughout the property you can find native pollinator-friendly plant species designed to provide forage and habitat for pollinators throughout the growing season.

During redevelopment, what wasn’t salvaged was recycled, and New Belgium diverted 97% of waste from local landfills.  In building the new brewing facilities, New Belgium incorporated 14 linear miles of wood and metal from the former Western North Carolina Livestock Market and other buildings on the property.  The tables and chairs in their tasting room are made with wood and metal salvaged from the property, crafted by an artisan directly across the river from the brewery. 90% of the brewery artwork was done by artists within a 3-mile radius of the brewery, and includes tile mosaics around the brewing vessels, bar tops, and tap towers. New Belgium achieved LEED certification on all of the buildings, including the brewery, tasting room and distribution center. 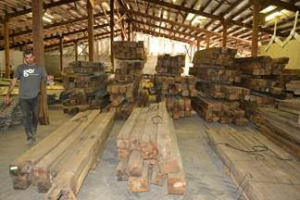 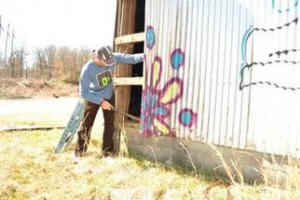 Demolition and salvaged material from old buildings and the Livestock Market went into creating the brewery. Photo by New Belgium.

Along with steam restoration and incorporation of salvaged materials, New Belgium partnered with the Asheville Design Center to build a new bus shelter on Haywood Road. Grant funds and materials from deconstruction of the former buildings were donated by New Belgium as well. The partnership with the City also included establishing a greenway along the river adjacent to the property: New Belgium agreed to give the City the land and the City built the greenway. At approximately a half mile in length, the greenway will soon connect with 5 miles of existing greenway (Buncombe County’s longest section). The City also invested in creating a trailhead at the north end (across the street from the New Belgium property) where an old maintenance yard used to be. The trailhead features wayfinding and historical signage about the site as well as a bike repair station, and vehicle and bike parking. Salvaged materials from the former Livestock Market were used to build some of the structures at the trailhead. 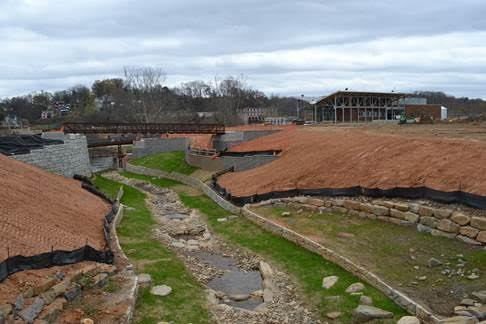 In many brownfield projects, a private company’s investment in a property will prompt the host municipality to invest in nearby infrastructure. This case was no different. The City of Asheville recognized the amount of capital and hard work that New Belgium was putting into their community and matched it by realigning and widening Craven Street, the only access point to the new brewery. Craven Street became Asheville’s first Green Street and Complete Street that accommodates not just vehicles but multimodal users as well. The Complete Street designation comes from the North Carolina Department of Transit, designated for a street that accommodates multiple modes of transportation and provides safe access and travel for all users. The Green Street designation refers to the bioretention cells and porous paving of the on-street parking as well as bioretention cells between the road and sidewalk that serve as both stormwater detention and planting areas. New Belgium also incorporated an integrated stormwater treatment system for the campus with bioswales, a bioretention and constructed wetland. Stormwater is cleaned as it passes through several BMPs before making its way to the French Broad River. Because the property contains less impervious surfaces than before the brewery was constructed, New Belgium went above and beyond, as they were not required to address stormwater this way.

The New Belgium Brewing Company is part of a renaissance in land recycling where old industrial facilities are being redeveloped into breweries. Their new site in Asheville particularly stood out to CCLR because of the holistic approach to site redevelopment. New Belgium not only redeveloped a brownfield but also restored and beautified the surrounding property, minimized waste by recycling existing structures, and inspired the City to invest in their community.

At the Center for Creative Land Recycling we want to give praise to those who deserve it. This redevelopment project was a huge undertaking, and the final product shows us all of the many benefits that can come from land recycling. Well done!