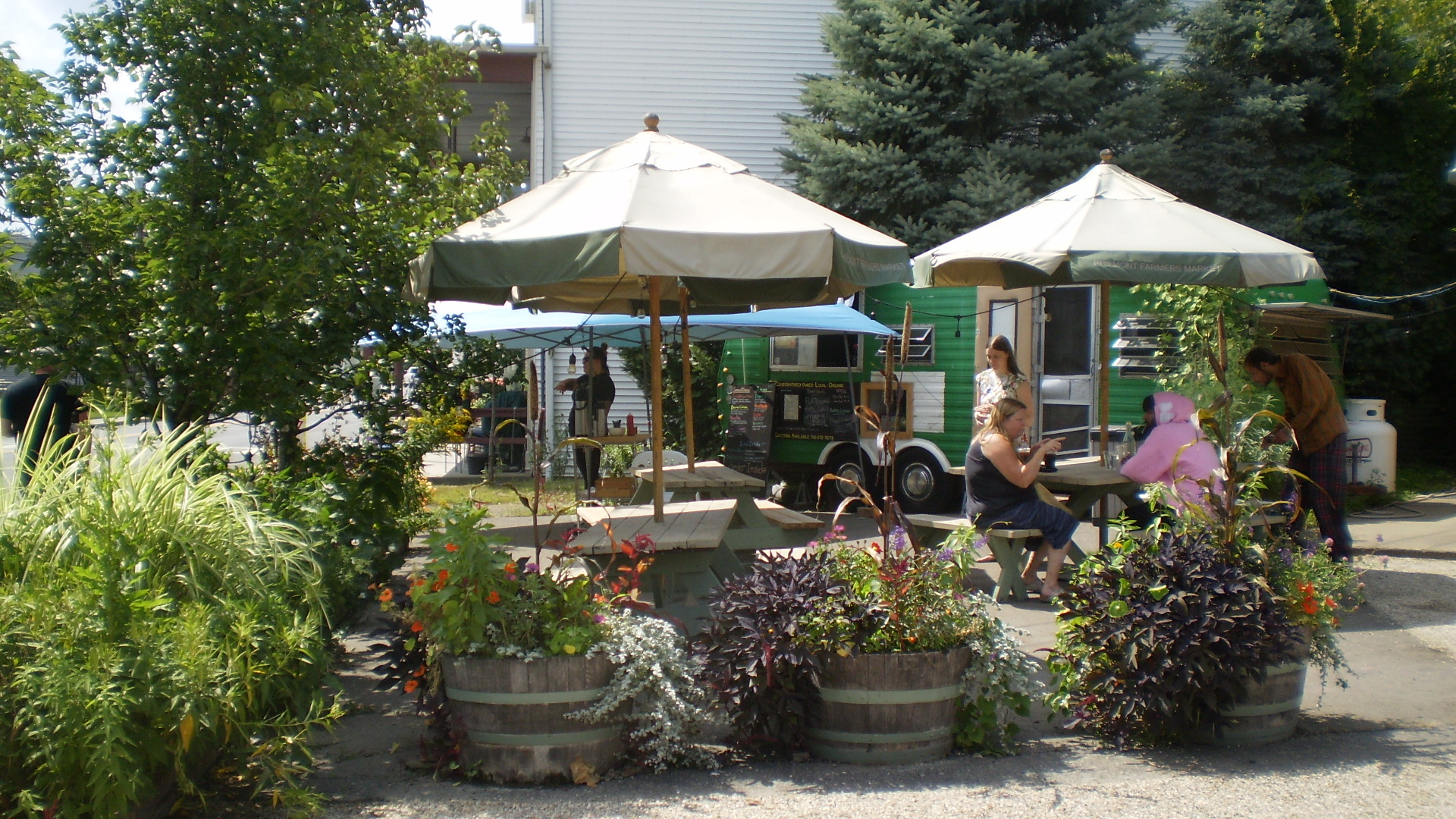 Streetscapes and Brownfields: A Model of Community Collaboration

A small village located in Columbia County, New York, Philmont has always been a close-knit community. It was the creation of a memorial garden for Preston Stern back in 2000 that first brought a group of Philmont residents together. Five women – each from different backgrounds, from managing a business to serving as an ER nurse – came together with a shared passion for community revitalization. They quickly found that they enjoyed working together on the public space project that overlooked Summit Lake. That’s how it all started. Philmont Beautification Inc. (PBI) was founded.

PBI’s work in redevelopment and land reuse started with and continues to revolve around collaboration and engagement. Working with community members is an integral part of the revitalization, and that mutual respect has resulted in winning outcomes for the Philmont community. Philmont’s story and their ongoing initiatives exemplify the idea that revitalization initiatives that truly reflect the needs and priorities of the community are built on effective communication, vigilant and strategic outreach, and opportunities for continued engagement.

Since its inception, the not-for-profit organization has encouraged and inspired hands-on collaboration. In 2000, PBI implemented an extensive artist in residence program at Taconic Hills High School to transform a neglected parking lot into the first public mural in the village. In 2009, PBI established Philmont Farmers Market to provide access to affordable and nutritious food. The list goes on and includes the restoration of 22 commercial and residential buildings (with 10 affordable housing units) and the creation of a commercial kitchen and local food cooperative, among other initiatives. Sally Baker, co-founder and Executive Director of PBI, attributes the success of these projects to PBI’s community-based approach which provides inter-generational opportunities for local residents to come together and collaborate. 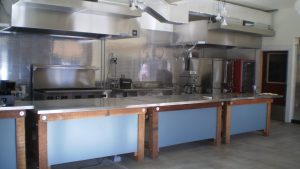 This approach to community-based planning and organizing is what truly sets PBI and the Village of Philmont apart. As opposed to the traditional topdown approach, PBI’s bottom-up approach allows residents to be involved in the decision making process – from project inception to completion. There is a project happening in Philmont all the time and PBI is “turning up, tuning in, and bringing people together,” says Baker. She further notes that people are excited to attend an event where they can spend a few hours contributing to a meaningful project. “People are not as interested in attending large meetings to discuss a comprehensive plan, it is just not something people want to do,” explains Baker. This is why it is so important to “meet the community where they are,” not only contextually as the adage traditionally implies, but in the literal sense as well. In fact, PBI does not have a physical office space and instead prefers to conduct meetings and workshops in established public spaces, such as community halls and libraries, as well as construction sites where revitalization projects are taking place.

PBI’s commitment to inclusivity is also reflected in their outreach efforts. Surveying and input solicitation has traditionally been done in person in order to collect a diverse sample of feedback. This can include anything from soliciting input from senior citizens at an assisted living complex to using a local business’s front porch to display and discuss design plans with community members. As Baker says, “PBI has consistent boots on the ground.” Though many in-person activities are no longer possible due to COVID-19, PBI has shifted their outreach efforts to various online platforms and “old school” methods of engagement – think snail mail and phone calls – in order to continue accommodating community needs. PBI’s ability to adapt stems primarily from their experience connecting with Philmont’s diverse community and actively listening to their concerns, interests, and ideas. 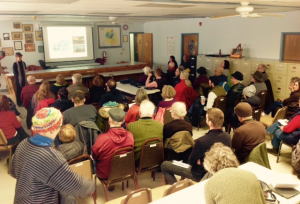 PBI and the Village of Philmont’s collaborative approach to community revitalization also played a pivotal role in helping PBI secure two grants through New York’s Brownfield Opportunity Area (BOA) program. This widely successful NYS initiative provides invaluable resources and technical support to help communities establish effective revitalization strategies to turn blighted properties into productive use. As one of the smallest villages in New York State to be awarded a BOA grant, PBI plans to restore Summit Lake, its post-industrial landscape, and vacant mills to active reuse for the community. The Summit Lake and its Watercourse was awarded a BOA Designation by New York State in 2019 with a total of 247 acres and seventeen selected priority sites. The sites include former mills, abandoned historic hotels, village trails, waterfront parks and playgrounds, vacant downtown storefronts, and the Summit Lake itself which is in need of environmental remediation.

With a project as big as the BOA, organized and inclusive community engagement is key. PBI has over 50 community members in different working groups for 5 BOA subareas collaborating at all times within the larger waterfront redevelopment initiative. This framework not only supports inclusive collaboration, it also fosters community investment, as individuals are able to choose the subarea and working group they ’d like to join based on their interests and areas of expertise. The collaboration doesn’t end there. In between regular meetings with the BOA working groups, PBI also organizes workshops and presentations that explain the redevelopment process so that community members are well informed and empowered to contribute feedback, concerns, and suggestions at each speed bump and turn on the road to redevelopment. Baker believes these opportunities to learn and meaningfully participate “ make a huge difference to people’s s connectivity ” to what PBI and Philmont are working to achieve.

Engaging community members in projects that will directly impact them and connecting them with land reuse practitioners is critical to leading responsible and inclusive redevelopment initiatives. PBI’ s strong relationship with the Center for Creative Land Recycling (CCLR) and their commitment to including community members in educational opportunities is evidence of this. According to Baker, CCLR has been a great resource in helping to bridge the gap between brownfield practitioners and the communities they serve: “We have used each of [CCLR’ s] brownfield summits to the maximum capacity that we could by bringing people from the community to the meetings so they could hear the keynote speeches, see the players… interact with government officials… that is a huge public access that CCLR has provided.” Additionally, Baker leveraged her participation in CCLR’ s 2020 “Your Resource Roadmap: Practical Planning and Layered Funding ” workshop with Sustainable Strategies to develop a Funding Matrix detailing over a dozen state, local, and philanthropic sources of funding that would support the planning, design, and construction of Philmont’s waterfront access and adjacent recreational paths as well as the redevelopment of their downtown main street businesses. This further highlights the substantial investment PBI puts into its community revitalization efforts. 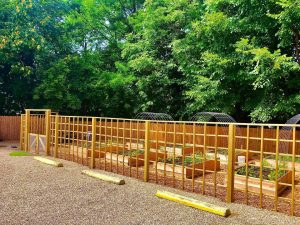 PBI and the residents of Philmont are always on the move, always progressing, and always working for a better community. In response to COVID-19, PBI in collaboration with the Philmont Co-op ’ s Equitable Food Access group, started the construction of Annabel’s Victory Garden in June, 2020. This beautiful 1,600 sq ft Victory Garden has 18 raised beds and started free harvests to the community in late August. Intended as a teaching garden in collaboration with multiple partners, PBI has already teamed up with the Philmont Library for joint programming with the Sylvia Center, the educator-in-residence at the Philmont Co-op, providing online Zoom cooking classes for kids and families during COVID-19. The Victory Garden will help to increase community resilience and serve as a reminder that even in the face of uncertainty, Philmont will always continue to move forward together.

Share
Ask an Expert
Recent Posts
Building Equity with Electric Vehicle infrastructure
Read Before You Buy: Important Update to All Appropriate Inquiries
The Road to Redevelopment: Promoting Coalitions in Arizona and Nevada