The Color of Law and Land Recycling

Many thanks to Don Edwards, CEO and Principal at Justice and Sustainability Associates, for his help and feedback with this piece.

Racial segregation in housing…was a nationwide project of the federal government in the twentieth century, designed and implemented by its most liberal leaders. Our system of official segregation was not the result of a single law that consigned African Americans to designated neighborhoods. Rather, scores of racially explicit laws, regulations, and government practices combined to create a nationwide system of urban ghettos, surrounded by white suburbs.
From The Color of Law, by Richard Rothstein

Here at CCLR, we’re looking forward to our April 9th webcast “The Color of Law: A Conversation about Segregation and Environmental Racism” with Author Richard Rothstein. Join us for what is sure to be an engaging conversation about how land recycling is a tool to build vibrant, de-segregated communities for all.

The Color of Law is subtitled: “a forgotten history of how our government segregated America.” Fundamentally, The Color of Law is a story about land use and power. Richard Rothstein is an education researcher by trade, which you wouldn’t necessarily know by reading his book. The Color of Law grew out of a research project that sought to understand why schools differ so dramatically across neighborhoods. Education policy led to housing, loan, and zoning policy. As land recyclers know, these issues also sit at the intersection of economic mobility, land use, political power, social justice, and environmental quality. The Color of Law is essential reading for land recyclers because so much of our work focuses on building communities that work for everyone, and history is not as far away as we think.

We need to ask why – why current land use patterns exist, how they developed, and what decisions made them possible. Without a historical perspective, we will fail to address the forces that created and perpetuated these inequities, like white privilege and white supremacy. Land recycling has the power to transform communities, but transformation doesn’t end with land: it includes institutions and attitudes, and working to transform these is equally important.

We live with the results of generations of segregationist housing policies designed and supported at multiple levels of government. Early American communities were built on models brought from Europe. They were defined by class: wealthier people near the center, poorer people on the outskirts. Slavery introduced the notion of the slave quarters as a distinct and separate entity, and housing discrimination is the contemporary manifestation of this historical pattern1. Norman Rockwell’s 1964 painting “The Problem We All Live With” shows a young Ruby Bridges walking to school in New Orleans, accompanied by four federal marshals. The same title could apply to any of the images in The Color of Law, from Federal Housing Administration “residential security maps” that redlined neighborhoods of color, to pictures of blighted and collapsing houses, products of racialized and predatory lending in the 2008 financial crisis. 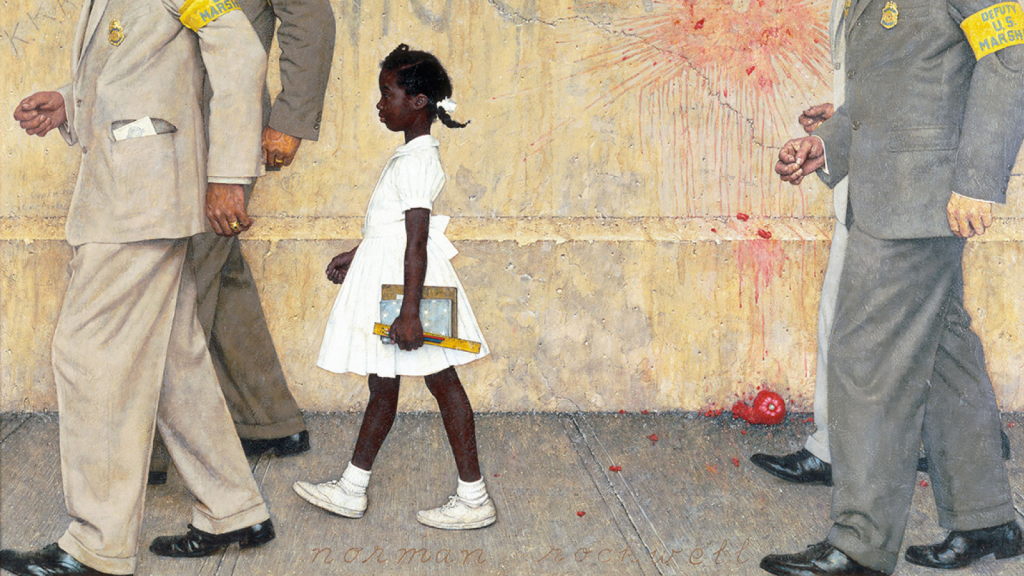 For environmental remediation and land reuse to truly support community-driven to transformation, we must understand and acknowledge our history, and recognize how the history presented in The Color of Law impacts our work today, here, now. Racial segregation has shaped our cities and towns, directed contamination at some but not others, and ruptured our social and urban fabric. Until we incorporate a view of history into our land reuse work, and acknowledge the impact that segregationist housing and land use policies have had on our communities, our impact will be limited. Consider this passage from The Color of Law about the construction of low-income housing in the mid-20th century:

In about a dozen states (among them California, Iowa, Minnesota, Virginia and Wisconsin), the few suburban officials who may have wanted integrated developments were prevented by state constitutional amendments, adopted in the 1950s, that required a local referendum before building a low-income family public housing project. Middle-class white communities then systematically vetoed public housing proposals.

The constitutionality of such referenda was challenged in the courts, as the racial motivation was obvious (senior housing required no referendum). In 1971, the Supreme Court ruled that such referenda were constitutional. In California, recent reporting spotlighted these same local referenda as a major obstacle to the construction of low-income housing. Once again, history is not far away. In fact, it’s hot on our heels.

It is important to note that while The Color of Law unveils difficult history, it is not a book that will leave you feeling discouraged. Rothstein’s final chapter includes a specific and powerful call to action, in the form of tangible things that all of us can do to create change in our communities today.

The Color of Law is necessary and thoughtful reading for everyone involved in the business of making cities. Be sure to tune in to our webcast on April 9th at 11:00am Pacific, 2:00pm Eastern to hear Richard Rothstein speak about the intersection of displacement and land reuse. You can register at this link.