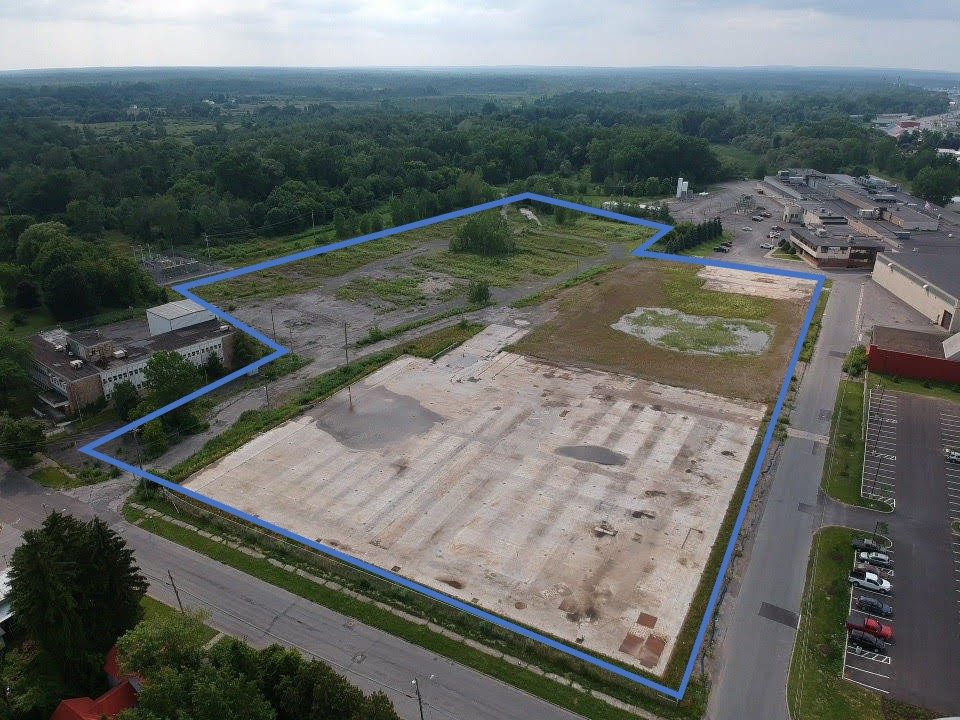 You know the tune, and it sounds familiar, but it’s a different song. Such is the case with the 40-acre Rome Cable Complex 4 site (Site) in Rome, NY. Situated in the heart of upstate New York, the City of Rome (Rome) is nestled in the Mohawk Valley, where many former manufacturing plants are singing the same tune. 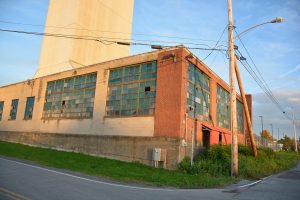 Once economic drivers, these plants and properties now sit vacant and abandoned, with known or suspected  contamination. This can stymy their “second act” and the ability to  attract a developer and a beneficial reuse option.

Enter the Center for Creative Land Recycling (CCLR), the leading national nonprofit championing beneficial reuse of environmentally-impacted properties.  For firepower to activate challenging sites,  CCLR partners with the Counselors of Real Estate’s (CRE®) Consulting Corps, a public service program of CRE that provides real estate analysis and action plans for municipalities, not-for-profit organizations, government entities, educational institutions, and other owners of real property.  Rome was selected from a national competition, underwritten by CCLR and the CRE Foundation, to provide select redevelopment projects with pro bono strategic guidance on property reuse options. The clients for the assignment were Rome Industrial Development Corp, Rome Brownfields Restoration Corporation, and Mohawk Valley EDGE, whose mission it is to strengthen and grow the Mohawk Valley Economy. These entities have been working together to transform the Mohawk Valley into a thriving place to  live and work.

CCLR and CRECC (“the team”), visited the property in late 2021  to explore best reuse options based on physical attributes, community needs, market values, and regional economic drivers.  The team sought  valuable insights and input from all  stakeholders with vested interests in the property’s future, including elected officials, residents, the business community, and state and federal agencies. The goal for the Team that met in Rome was to discuss reuses that would catalyze reinvestment, leverage existing assets, spur job creation, and complement the adjacent neighborhood.

Historically, Rome was known for its metal industries during the Industrial Revolution and gained the name, “Copper City”, as it produced 10% of all copper in the nation. Many pioneering minds came from Rome including Francis Bellamy, who authored the “Pledge of Allegiance”, as well as the author of Roots, Alex Haley, who lived in Rome in the late 60s and early 70s. Once a thriving city, the closure of Griffiss Air Force Base in 1995 had devastating effects on its economy. Rome lost more than 5,000 jobs (30% of its economic base), and its overall population steadily declined until a few years ago. Rome’s downtown is rich in history and situated along the original Clinton’s Ditch alignment, where the ceremonial first digging of the Erie Canal occured back on July 4, 1817. 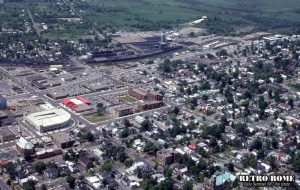 Rome, NY 1977 with Rome Cable in top center of the photo. Courtesy of the Rome Daily Sentinel

Located in one of Rome’s oldest historically industrial neighborhoods,, the Site was once home to the 800,000-square-feet Rome Cable Corporation plant. It invented and produced, among other things, “ROMEX” wire, and was one of the largest employers in the city. After 60 years, Rome Cable Corporation filed bankruptcy and closed its doors in 2003. Contamination was later discovered, and in 2020 a $13M cleanup was completed by the State’s Department of Environmental Conservation (NYSDEC) .

The Site is currently zoned industrial and consists of 10 developable acres located at the eastern corner of S. Jay and Henry Streets, with full access to City infrastructure (i.e., water, sewer, gas, electric, telecom). The remaining property is encumbered by wetlands and will remain open space. 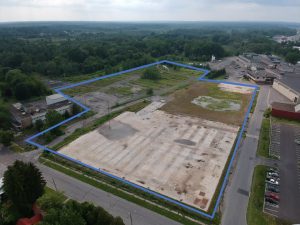 Many incentives and assets exist at the Site including its location at or near:

Most importantly, the project has had a champion in Mohawk Valley EDGE (Economic Development Growth Enterprises Corporation; MVEdge), who provides a coordinated economic development program that assists businesses in locating, growing and prospering in Oneida County. MVEdge has been spearheading the redevelopment of the Site and has led extensive engagement activities with the public and other stakeholders since 2017.

The Team expected the usual “stuck” superfund property with the typical challenges and issues. What it didn’t expect was the outpouring of support and thoughtful consideration that stakeholders had taken in order to get the property remediated and ready for redevelopment. Stakeholders were interviewed and a wide range of uses were considered such as: mixed-use with residential, a recreational complex with indoor and outdoor uses, an outdoor educational/environmental campus or an annex for a higher education institution, a manufacturing campus, or for an existing business in the immediate area.

While in Rome, the team explored the surrounding area, spent time on the site and met in small groups with more than 50 stakeholders. It became apparent that the Site was special to the community, and that it had the potential to be a contributor and not a detractor to the Downtown and adjacent neighborhood. The people of Rome genuinely care about their city and have deep roots that are vested in making it the thriving City it once was. There was no shortage of hospitality and the visit made the front page of the Rome Sentinel. 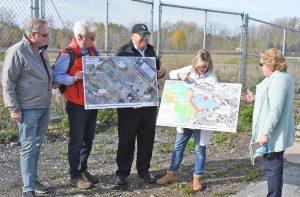 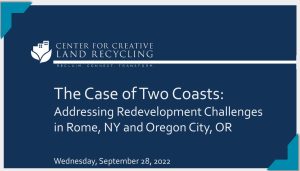 View the slides from the Case of Two Coasts Webinar with the Counselors’ of Real Estate and leads on the Rome Cable Complex redevelopment.

Prior to the Team’s arrival, many were skeptical about the site’s potential. “Before arriving onsite, we were concerned that this was a story of a rust-belt struggle to survive population loss and industrial decline,” said P. Barton DeLacy, CRE, executive director with Cushman & Wakefield in Seattle and team leader for The Counselors’ Rome assignment. “Rome suffered a 25% drop in population over several years in the wake of the closure of the Griffiss Air Force Base that had been a significant contributor to the local economy as its largest employer,” said DeLacy.

What the team found, however, was a City actively transitioning from legacy industries to new. The Griffiss had been converted to a business park that attracted defense-related contractors that made use of the energy and logistical infrastructure that remained in place. At the time of the visit, the park was at full occupancy, with only limited large development sites available in the Rome market to meet emerging tech-related demand.

But like a classic song that has a revival, a new generation and audience gives it present-day meaning and purpose.  Such is the case with the Site. Its resurrection is filled with renewed hope and meaning for not only those intimately involved with its second act, but also with adjoining neighbors and businesses.

The Counselors’ primary take-away and recommendation was that the site had good potential for redevelopment and that the City should support the development authority to build or bring in an investor to build flex industrial building/s, and that a subsidy would most likely be required for an investor to build. According to The Counselors, flex/industrial is the best use for the site because:  residential is neither legally nor economically feasible due to environmental restrictions; there is not a demand for Class A office and retail development and therefore not economically feasible; there is a limited number of shovel ready industrial sites in the Rome market; and research shows the vacancy rate has declined and market rent has increased within the Industrial Sector to make a project successful with the right model of financing and risk management.

“There is a project for this site that will contribute as greatly to the community as the blighted site now detracts from the neighborhood,” said DeLacy. “Our team found that Rome is almost there. The eyesore has been removed, the site cleaned, and the opportunity for something new aborning. The Consulting Corps team hopes we made this vision a little clearer.” 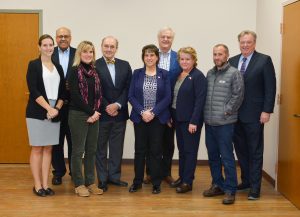 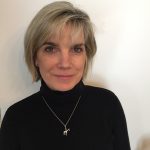 The Case of Two Coasts: Addressing Redevelopment Challenges in Rome, NY and Oregon City, OR