Highlights from the City of Los Angeles Brownfields Program

The City of Los Angeles Brownfields Program provides financial and technical assistance for the environmental investigation and remediation of brownfield sites. Brownfields are properties where reuse or redevelopment is complicated by the presence or potential presence of contaminants or pollutants. Oftentimes brownfields sit vacant and blighted, making their transformation crucial for community revitalization. The Program staff at the Los Angeles Brownfields Program has their work cut out for them, with the goal of removing barriers to redevelopment posed by brownfields.

Currently, the Los Angeles Brownfields Program is working with the California State Water Resources Control Board (SWRCB / Water Board) and the California Department of Toxic Substances (DTSC) to support environmental assessments and cleanups at two vacant, underutilized sites in the City of Los Angeles. With assistance from the SWRCB and DTSC, the redevelopment of these sites will improve neighborhood safety, provide jobs and improve public health.

The two sites are summarized below. This site is located within a 232 acre industrial development in the Wilmington area of the City, known as the Wilmington Industrial Park (WIP). The WIP is comprised of a mix of privately owned industrial and some office structures, residential dwelling units, oil extraction equipment, salvage yards, streets and alleys. Revitalization efforts began in 1974, when WIP was designated a Redevelopment Area by the Los Angeles City Council, in efforts to reduce blight and create labor-intensive industries. Since then, the City’s coordination and clean-up has resulted in 33 new and expanding projects, 700,000 square feet of development, and $30 million in private investment.

The WIP was declared a Brownfields Demonstration Site by the Los Angeles City Council in July 2000 to recognize the collaboration among City departments and in addressing the large number of brownfields sites area. The WIP has both great potential for redevelopment and substantial barriers, including securing grant funding to complete clean up. The Los Angeles Brownfields Program is currently coordinating with multiple agencies to ensure that clean up happens in a timely manner. Redevelopment of this site has great potential as its planned commercial/ industrial uses could create new jobs. Additionally, it is well located, close to the ports of Los Angeles and Long Beach with easy access to three freeways and direct connections to rail lines.

The Los Angeles Brownfields Program team is working with the DTSC and Water Board to obtain additional grant funding to complete cleanup at this site. After remediation is complete, this site will be ready for commercial/industrial redevelopment. 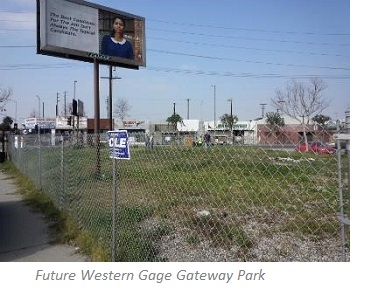 The future Western Gage Gateway Park site is currently a vacant lot with no surface improvements located in a residential and commercial-retail area. This site is in the process of being transferred to the City from the former Los Angeles Community Redevelopment Agency (CRA/LA). Prior to the transfer of the lot, environmental assessments were conducted to determine historical uses and potential environmental concerns. Between the 1920s and late 1960s, the lot was occupied by various automobile repair facilities and vehicle fueling stations, which exposed the ground to various contaminants including VOCs, petroleum hydrocarbons and gasoline. Underground storage tanks (USTs) also were removed from this site in the 1950s and 1970s.

Previous subsurface sampling activities identified soil and groundwater contamination from 10-25 feet below ground surface. To complete additional subsurface investigations and cleanup, the Los Angeles Brownfields Program has secured grant funding from the Water Board. Once cleanup is complete, the City plans to redevelop this site as a community park with features including attractive landscaping, sidewalk repairs, architectural features, lights, and street trees. 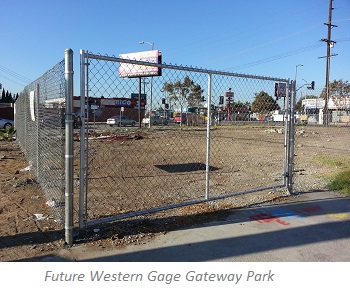 If you have questions or would like to learn more about the City of Los Angeles Brownfields Program, please call 213-485-2260.