Retail is a notoriously complex component of real estate. Boost your knowledge and demystify retail by joining CCLR for a free webinar on September 25 featuring David Greensfelder, retail expert, developer, and CCLR Board member. Every redevelopment practitioner needs to know what questions to ask about retail, so don’t miss out – this is a unique opportunity to hear directly from an expert who regularly wrangles retail in tough redevelopment projects, including one of the toughest out there, a grocery store in a historically marginalized neighborhood. Read on, and register here.

Too many Americans lack access to healthy food, and it is notoriously difficult to make grocery stores pencil in the neighborhoods that need them most. That’s why we at CCLR care so much about spreading the word about new models and best practices, like West Oakland’s Community Foods Market (CFM), which opened on June 1, 2019.

Thanks to our Board member, David Greensfelder, CCLR is fortunate to have an insider’s perspective on what it took to make CFM work. David is a developer and retail expert. He performed the initial real estate market analysis that laid the groundwork for CFM. Working together with CFM’s original booster, Brahm Ahmadi, David also developed the project, working on everything from design to pro-forma/financing to entitlements and construction-related tasks.

On its surface, CFM was a simple, single-tenant redevelopment project, but creating a new grocery store is much more complex than an initial assessment might indicate. The process starts with developing a merchandise plan, which is a complex project in itself, and covers everything from what the store will sell and for how much, to how goods will be delivered, to how employees will be trained, and what kinds of foods the attached café will offer. Once the merchandise plan is finished, more development work awaits, like designing a building, reconciling that building with the merchandise plan, obtaining entitlements, and finding financing. Add to that a neighbor’s frivolous lawsuit (that was ultimately withdrawn), a surprise underground storage tank, and weather conditions during construction, and a “simple” grocery store project quickly starts to look shockingly complex.

About West Oakland
West Oakland is a neighborhood within the City of Oakland. It’s home to 25,000 people (out of a total of 425,000 in the City), many of whom earn moderate to low incomes. 50% of West Oaklanders do not own a car. The neighborhood is also home to significant communities of color, and has a long history of African American social and political activism (the Black Panther Party was founded here in 1966, for example).

West Oakland has a history of heavy industry, which raises the risk of environmental contamination and makes redevelopment more complicated. It was redlined and then divided by freeways in the 1960s, and hosts both the Port of Oakland and a massive US Postal Service processing facility. Those highways, interestingly, made a difference for CFM — they meant that CFM’s trade area was smaller, which meant that its forecast sales were weaker, which meant that it was harder to secure financing (more on that later). It’s another powerful illustration of how and why the built environment matters.

West Oakland is seven minutes by train from San Francisco, and not surprisingly has seen rising rents in recent years, concerns about gentrification and displacement, and new development and redevelopment after decades of relative inactivity. Before the current development boom, West Oakland flew under the radar. It was always too hard to get redevelopment to pencil there, because the land available was often contaminated.

A vision takes hold
David’s involvement in CFM goes back to 2014, and the idea for the market stretches back five more years before that. It starts with Brahm, a social entrepreneur who was fed up with West Oakland’s food situation.

Brahm had worked in the neighborhood as a community organizer, and heard neighbors repeatedly cite the lack of available healthy food as a problem. Diabetes and other chronic diseases affected many households, and as Brahm notes, West Oakland residents had made the connection between these diseases and the lack of healthy food long before food deserts were a national public policy discussion: “People want change, and they want a built environment that enables that,” he said. In 2002, the desire to improve West Oakland’s built environment led Brahm to start working on the effort that would become Community Foods Market. He established a Community Advisory Council, which met weekly on issues ranging from workforce development to products the store would stock.

This level of community engagement is central to CFM’s success, especially in a rapidly changing neighborhood. As Brahm noted, community involvement builds trust, “so that residents trust you and your vision and your intent. From a practical business perspective, you want to get it right, and there’s no better way to do that then to listen to residents and have them help you create it.”

His approach is backed up by recent research from University of California at Davis professor Catherine Brinkley, who recently assessed why local grocery stores fail, especially grocery stores in low income neighborhoods. As she concludes, “The success of a supermarket intervention is predicated on use, which may not happen without community buy-in.” A successful grocery store is about meeting demand with supply, but it’s also about building trust, which can give way to a sense of local ownership. Trust takes connections, which is perhaps why Brinkley saw stronger likelihood of success among grocery stores that were started by community groups or non-profits (see table below). 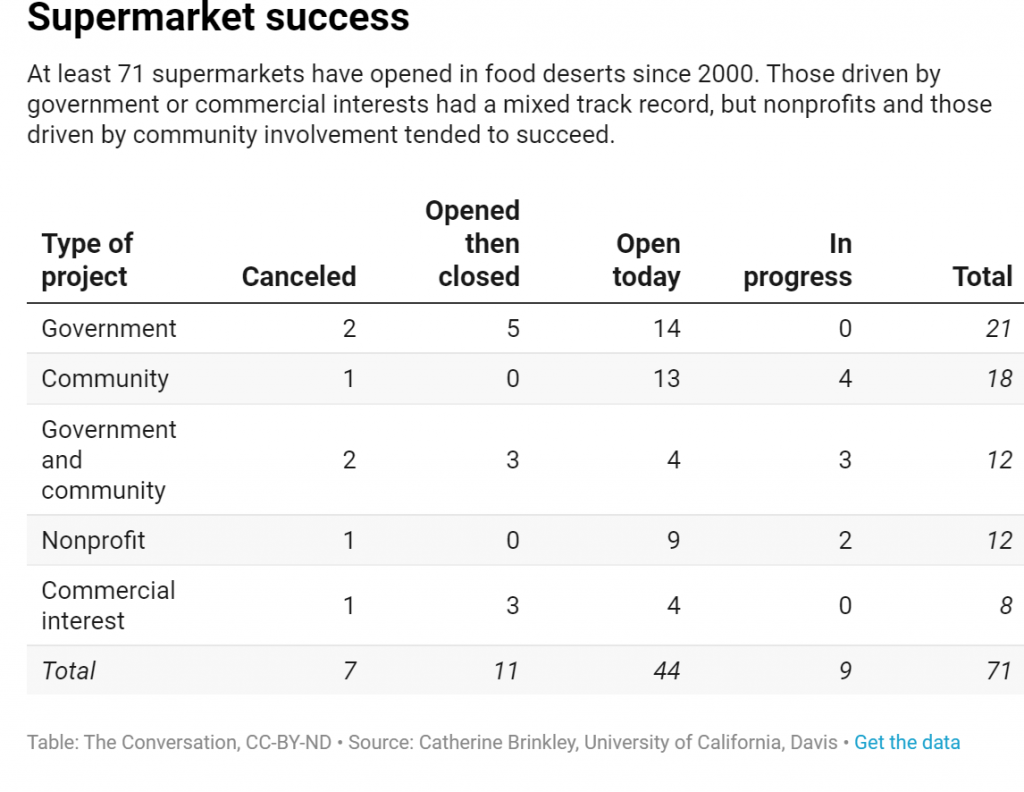 “We are purposeful and intentional about pretty much every decision we make about our business,” says Brahm. He stressed the need for the store to feel welcoming and accessible, not upscale or off-putting — there are too many examples of well intentioned grocery stores in low income neighborhoods that didn’t make it because they were perceived as natural foods stores or some other grocery subspecies that didn’t meet local needs. That means being responsive to requests and carrying foods that reflect West Oakland’s culture and neighborhood preferences. The chefs and cooks at CFM and its attached Front Porch Cafe come from the neighborhood, and it is perhaps no surprise that hot foods are the best selling items at CFM right now.

Organic and vegan products are available at CFM, but as Brahm described, “We carry the junk, too, because our goal is to create traffic so that we engage the community. If they’re not coming in because we don’t carry what they want, we’re never going to get to the point where we can have a conversation, or offer a class, incentive, or sample. That whole journey will never happen if someone never comes in in the first place.”

What is important to Brahm is relevance and offering a spectrum of choices, and it’s paying off in the store’s first 100 days. CFM customers include a broad cross section of West Oakland residents. “We serve low income seniors, low income families, the homeless, sex workers, drug dealers, newly relocated IT people from San Francisco, artists, the whole gamut. It’s awesome. We’re focused on sustaining and leveraging that to create opportunities for cross-interaction and cross-pollination,” notes Brahm.

A store and a community anchor
What makes CFM such a great story for land recyclers is its creative approach to funding. The cost of CFM was estimated to be $15 million — too big for crowdfunding. Plus, Brahm and David felt that CFM wouldn’t sufficiently stand out in the crowded field of projects vying for the public’s dollars.

That led them to take CFM to the people via a Direct Public Offering (DPO). A DPO offers shares in the project directly to the public, with investment minimums based on income. It’s not common, and it’s hard to do it well. DPOs have been used by Costco, Ben and Jerry’s, Annie’s, and others. CFM generated about $2.4 million from around 650 shareholders, 80% of whom were Oakland residents. 30% were West Oakland residents within a half mile of the store. The average investment was $3,200, and the minimum was $1,000. Half of all investors invested at the $1,000 minimum level, including churches, small businesses, and non-profits, all of whom bought in alongside foundations and high net-worth investors. The project raised a total of approximately $15 million through CDFI’s such as San Francisco-based Community Vision, federal grants, DPO, New Market Tax Credits, and other sources. From a financing perspective, it is the grocery store equivalent to a tax credit-financed affordable housing project. As Brahm noted to Next City, the results of the DPO gave the project credit with institutional investors, and led the way for helping CFM access other types of funding.

CFM took root on a lot at the corner of San Pablo Avenue and Myrtle Street (3105 San Pablo). The site hosted a tile and granite showroom (that building was later demolished), and back to the 1940s, it had been a Harley Davidson shop. David conducted a Phase 1 Environmental Site Assessment. It came back with no Recognized Environmental Conditions (a technical term for “red flags”), relieving David and Brahm of the need to conduct a Phase 2. They did find one environmental surprise, however: during construction, they encountered an abandoned underground storage tank in the public right of way. It wasn’t on any databases, but CFM was responsible for managing the tank per City of Oakland code. Other environmental issues the project faced were more related to traffic, parking, and CO2 reduction than to contamination. 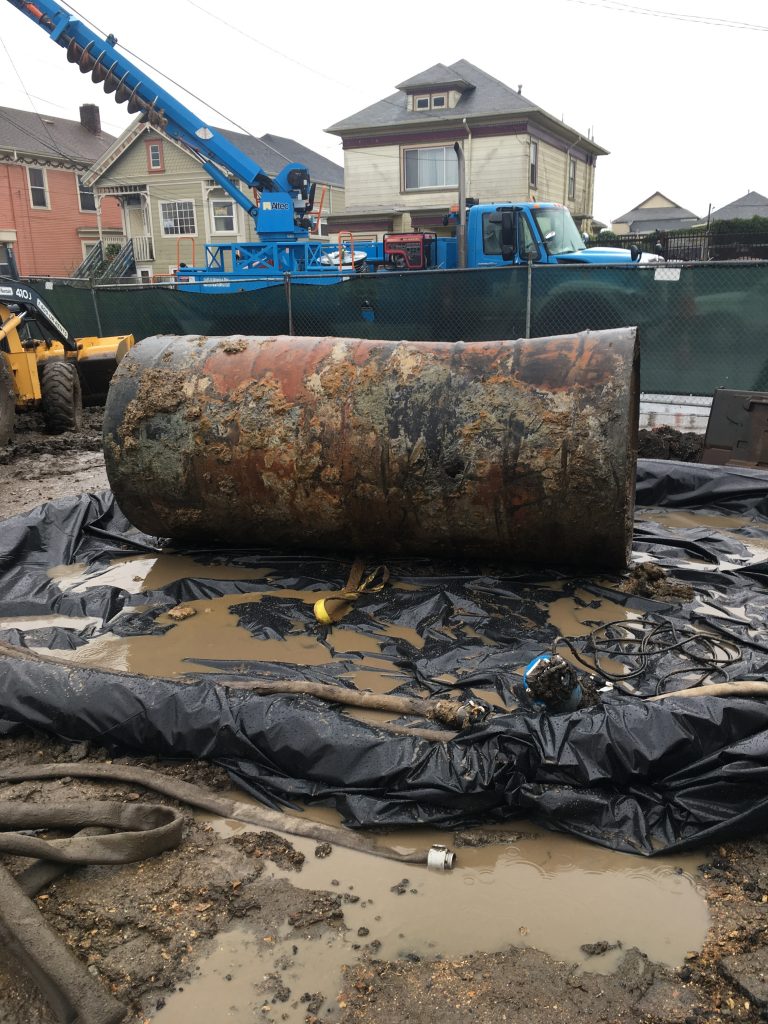 CFM opened its doors on June 1, 2019. At 14,000 square feet, the building is similar to the size of a Trader Joe’s store, and less than half the size of a traditional grocery store. CFM’s goal is to be a full service grocery store that offers healthy food alternatives, and that also serves as a focal point for community health initiatives, like diabetes and high blood pressure screening. Its Front Porch Cafe is intended to serve as a community gathering/programming space, where meetings might take place, non-profits might offer services, or customers might receive meal planning help.

From its name to its branding, color scheme and signage plan, CFM was designed to be welcoming and accessible to West Oakland residents, and is geared to serve the underserved, underrepresented West Oakland community. CFM’s ownership and financing are aligned with its mission in a way that reduces pressures to service higher cost loans or maximize returns to owners. The store’s smaller scale also reduces overhead. All this translates into the ability to charge lower prices for groceries. For example, organic kale goes for $1.49, and conventional for $0.99 — 50% less than comparable grocery stores. CFM currently employs 55 people, with 65% or more coming from the local neighborhood.

Asked about his advice to other aspiring grocers, Brahm notes that “the most important factor is to understand how tough this is. The barriers are enormous. You have to have partners, because they can bring you capable, creative solutions for dealing with business barriers like capital, permits, real estate, and helping with outreach to the neighborhood. There is no way we could have done this without that mix.” Among these factors is a branding challenge, as some consumers are attracted to and often prefer larger corporate retail brands, even if they have to travel further or spend more. “It’s by no means a given that a community-oriented store, even with extensive community engagement and roots, will succeed in a culture dominated by powerful corporate brands.”

A grocery store is a complicated endeavor. As David noted, in many ways it’s more appropriate for a graduate thesis than a blog. CFM is a great example of healthfield redevelopment, and a reminder that creative land recycling can take many forms — not only in terms of what we produce, but how we get there. Isn’t always easy, but the potential ROI can be massive, and Community Foods Market is a great example. Food for thought. 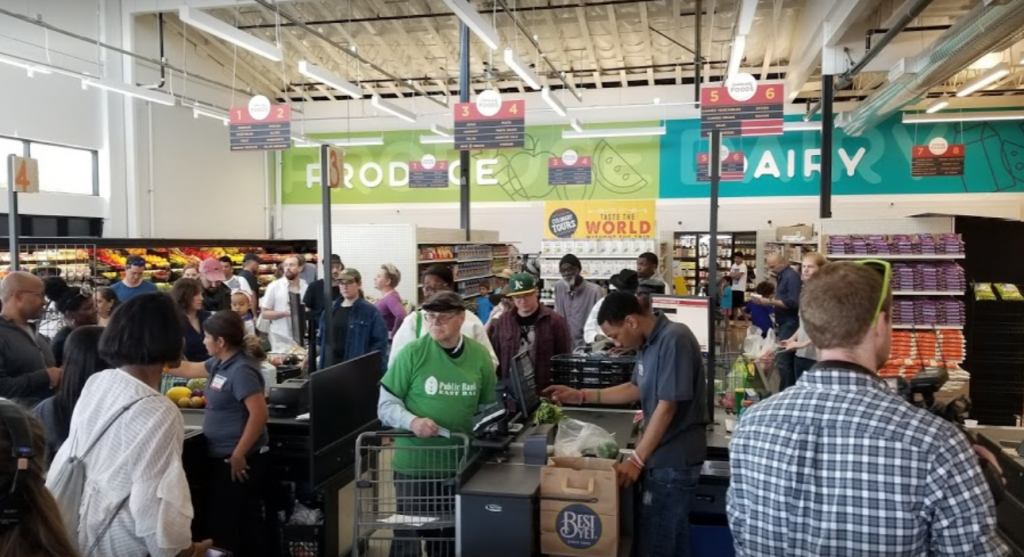