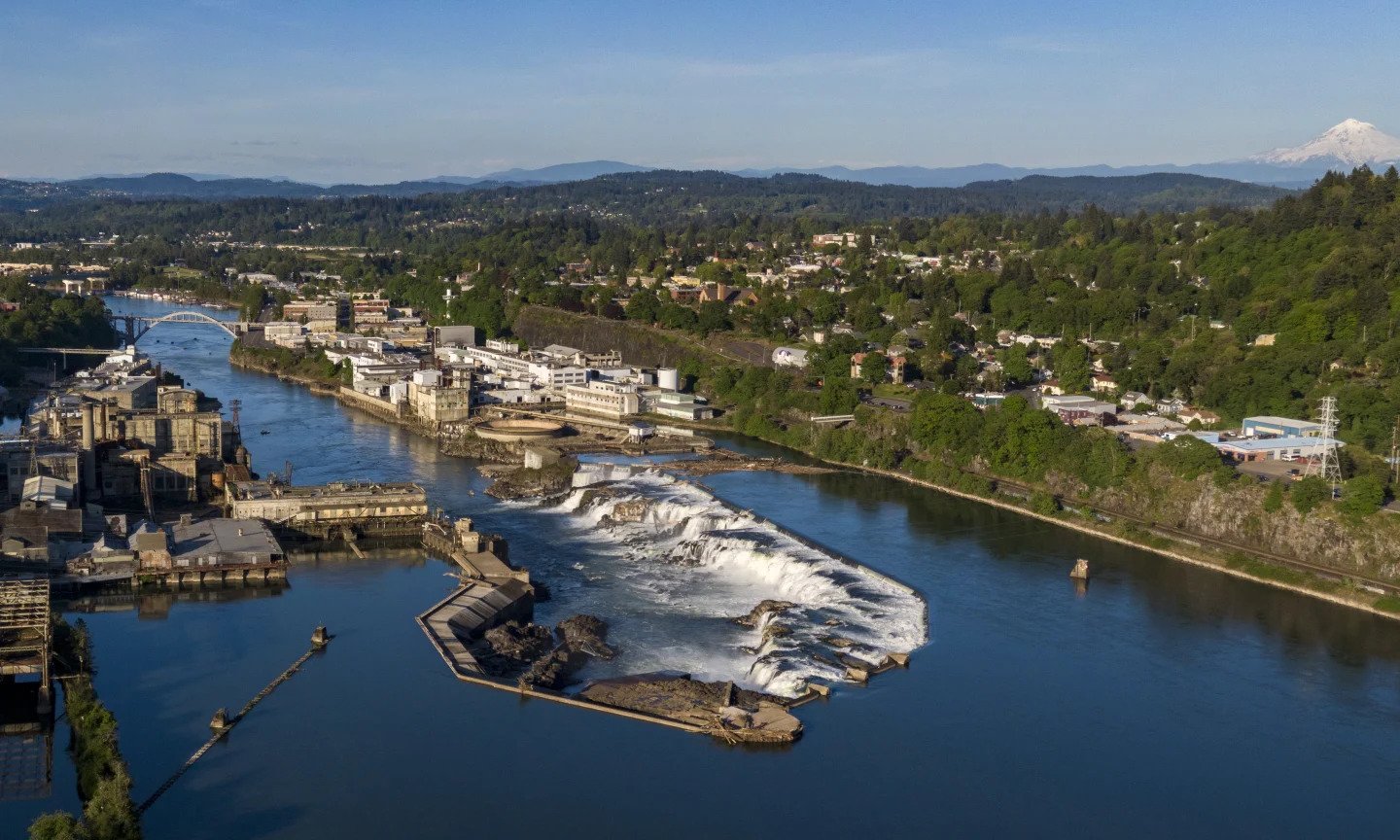 Healing and Restoration: Willamette Falls and its Brownfields Journey

Most Americans have heard of the Oregon Trail – the more than 2,100 mile early-American wagon thoroughfare that traveled through nine states between Independence, Missouri and Oregon’s Willamette Valley.[1] However, what most people don’t realize is that at the end of the trail is the ancestral land of several native tribes, tribes that were forced out to make way for settlers and their industry. At the trail’s terminus in Oregon City, Oregon, roughly an hour southeast of Portland, is the second largest waterfall in the United States, Willamette Falls. These falls are the place where a team of professionals gathered in late January 2022 to assist in a unique brownfields redevelopment project.

The Confederated Tribes of Grand Ronde is a federally recognized Tribe that includes more than thirty (30) Tribes and bands from western Oregon, southwest Washington and northern California[2]. While active throughout its ancestral homelands, it is primarily located on an 11,500 acre reservation in Yamhill County in western Oregon. There are approximately 5,400 tribal members and it is governed by an elected nine-member Tribal Council. The Tribe’s history includes the U.S. Government breaking multiple ratified treaties and stripping its federal tribal status in 1954. Like many Native American tribes, members of Grand Ronde were forcibly removed from the Willamette Falls and relocated to Grand Ronde more than 75 miles away.  It wasn’t until 1983, when the Grand Ronde Restoration Act was enacted, that the Tribe regained its federal recognition and continued working diligently to regain, build and secure its assets. 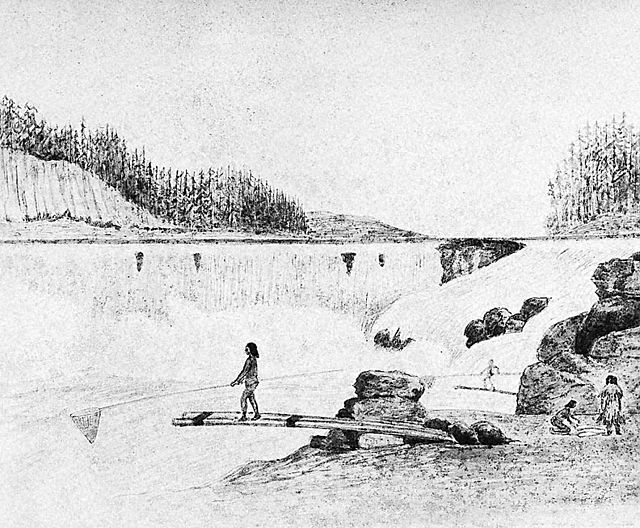 Willamette Falls, a natural horse-shoe shaped waterfall 1,500 feet wide and 42 feet high, is not only a majestic natural wonder, but it is also culturally significant to many area tribes. Today, the falls are flanked by historical industrial development which long ago was built on lands, that are now included in the Confederated Tribes of Grand Ronde (Tribe)[3]. In 2019, the Tribe purchased 26 acres of property on the east side of the  Willamette River once occupied by The Former Blue Heron Paper Company. After closing its doors in 2011, the paper mill left behind a sprawling industrial complex with numerous multi-storied, vacant and dilapidated buildings that not only contained many unknown environmental conditions, but also created a barrier making the land, river and falls inaccessible to the public.

According to the Tribe’s March 2021 Visioning for Blue Heron, “The ownership of this property allows the Tribe to return to the role of stewards, and caretakers, of these lands…and has the opportunity to return public access and provide economic development to a historically important area for sustenance, commerce and culture.”[4]

With this vision in mind, the Center for Creative Land Recycling (CCLR), along with the Counselors of Real Estate® (CRE) Consulting Corps, visited the property in late January/early February of 2022 to better understand the site’s unique history and cultural significance as well as meet with various stakeholders including the Tribe. Prior to the team’s arrival, the Tribe was one of two finalists selected from a national competition, underwritten by CCLR and the CRE Foundation, to provide select redevelopment projects with pro bono strategic guidance on property reuse options.

The client for the assignment was the Tribe, whose mission it is to heal, restore and provide appropriate economic development that connects to the cultural and historical significance of the land, river and falls. Together with its consultants, the Tribe has been diligently working on addressing current existing conditions, addressing environmental unknowns and redeveloping the property in a way that aligns with its visioning that includes elements of success as identified by Tribal Council. 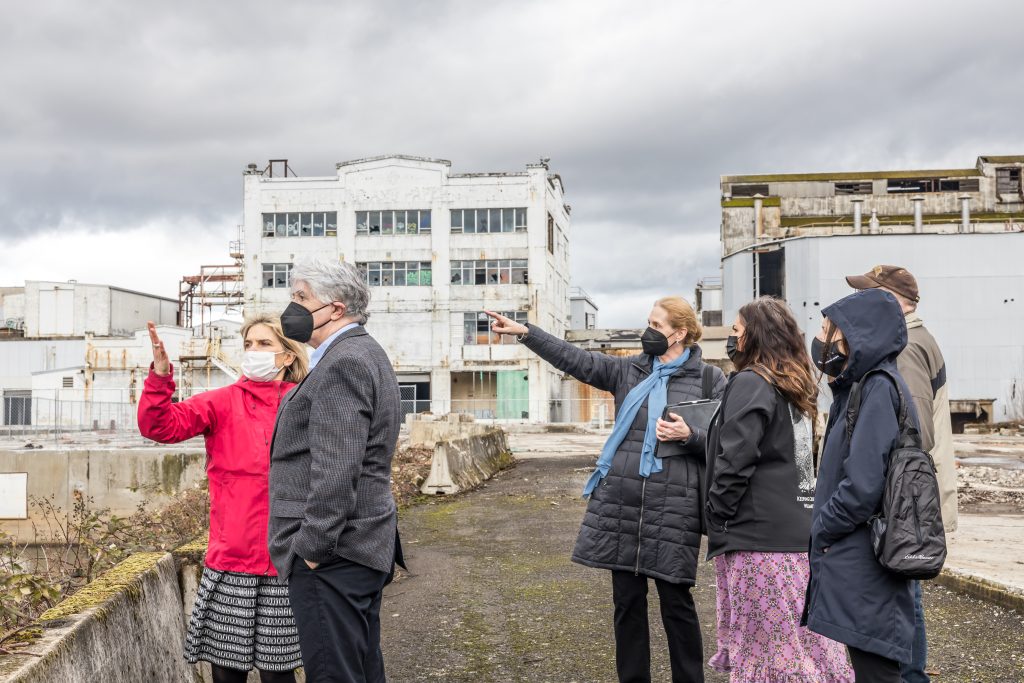 In 2021, the Tribe was awarded an EPA Brownfields Grant to help assess and remediate the property to allow for future redevelopment. Unlike most brownfields redevelopment projects, the Tribe’s vision was not centrally focused on economic development but more focused on the healing and restoration of the walamt (Willamette River) and tumwata (Willamette Falls)[5]. The Tribe’s connection to the falls (above and below) goes back centuries until Euro-American settlement expanded in the early 19th century and brought in heavy industry that would remain into the 21st Century.[6]  The current structures served different purposes and therefore were constructed differently. While some may or will be demolished, others could be adapted and re-purposed, or require extensive remediation, seismic upgrades and/or reconfiguration that would then exceed their value. With the assistance of GBD Architects and Walker|Macy, The Tribe embarked on its visioning journey in late 2020 and created goals with the central design direction of “Healing” when considering the site’s landscape and potential for redevelopment as well as “Restoration” of the site’s environment and ecology.[7]

Using this vision, representatives from CCLR and CRE (the “Team”) embarked on a multi-day exploration of the immediate and surrounding built environment, as well as interviewing a variety of stakeholders to provide input related to the redevelopment of the property. The team considered an array of factors, including, but not limited to, the adjacent (downtown) built environment, local and regional circulation and transportation conditions, accessibility and viewsheds, housing stock, economy, and job market. Interviews included Tribe staff, local officials, municipal staff, and other key stakeholders to gather information to provide a multi-perspective view at the project. The team was hyper aware of the significance of the property and understanding the Tribe’s Ikanum[8] (Story) as it related to its desire to create something special and enduring for future generations to come. 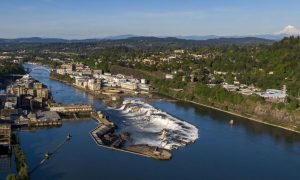 The Site is extremely unique not only because of its proximity to the Willamette River and Falls, but also because of its shape and a number of encumbrances including a singular ingress/egress point at the north of the property, a non-functioning hydroelectric dam to the south owned by Portland Gas and Electric (PGE) and directly to the east is the Union Pacific Railroad tracks as well as 90-foot high bluff. The bluff is home to McLoughlin Boulevard, a busy four-lane highway that serves as the gateway to Oregon City’s downtown; however, it does not allow any visibility to the river and falls below. Beyond the bluff is a plateau that primarily consists of residential and commercial development as well as municipal and county offices. Of particular note is that the property has nearly a quarter mile of river frontage and is approximately 500 feet wide. The southern part of the site closest to the falls, while occupied by PGE, also has open area most suitable for ceremonial uses as indicated by the Tribe.

The Team, comprised of real estate, valuation, economic development and planning professionals, was asked by the Tribe to offer a market assessment and development guidance as it pursues its goals and vision around healing the land and restoring access to the river and falls. The Team reviewed a previous highest and best use study, as well as other pertinent documents, plans and studies around the project. The Team concluded that the Tribe’s multi-generational ownership will allow it to be stewards of the land and falls for years to come and that the redevelopment can co-exist with the Tribe’s vision of restoration and healing. Some of the recommendations provided to the Tribe include, but are not limited to:

Prior to the Team’s arrival, the Team met with the Tribe’s Cultural Resources Department as well as several members of the Tribal Council who provided invaluable historical information, knowledge, guidance, and cultural input that was crucial to the Team’s understanding of the Tribe’s connection to the property, the river and the falls. Without this input, the Team would not have worn the correct lenses to view the project – for this we are extremely grateful for their time, knowledge, and willingness to share and educate.  It provided a solid foundation to build from and one that others can learn from.

Often people come into brownfields projects with preconceived ideas and concepts without first actively listening and observing.  This needs to be at the forefront to have a holistic understanding of the property and its redevelopment potential. The Team provided many informative observations and recommendations, but at the end of our visit, we all left with a deeper sense of what the Tribe had been through and what its journey now entails for future generations at Willamette Falls. The magnitude of its stewardship – its connection – cannot be overstated and is an important lesson to those embarking on a brownfields redevelopment project. Lastly, a clear vision is essential to carry a brownfields project of this size across the finish line.

The road gets bumpy and filled with detours; however, the vision helps to maintain the course and eventually its success.  Economic development does not always have to be the impetus to transform a brownfield site. As with the case of the Blue Heron site, the Tribe’s vision of healing and restoration remains the primary goal, which will guide the project to its eventual success. Remaining true to your community’s needs will always keep your project pointed to true north. It’s when we don’t actively listen, don’t have a connection or a vision that we get lost. Kudos to the Tribe for following its true north.

You can follow the Tribe’s redevelopment on their site for Tumwawa Village. 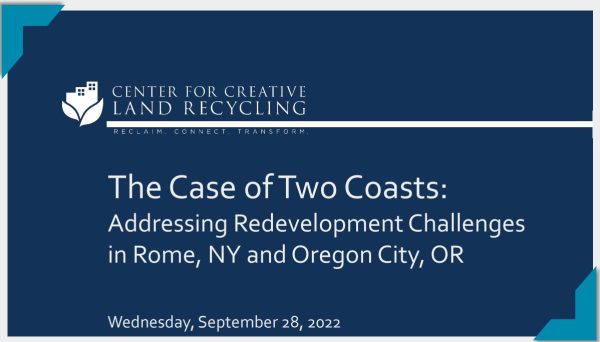 View the slides from the webinar The Case of Two Coasts: Addressing Redevelopment Challenges in Rome, NY and Oregon City, OR for more information on this project.

Counselors have created and endowed the MIT Center for Real Estate, resolved the dispute between the developer of the World Trade Center and its insurers post-September 11, led the privatization of U.S. Army Housing, developed a multi-billion-dollar, 10-year master plan for Philadelphia Public Schools, and valued both the Grand Canyon and Yale University. Counselors reside in 21 countries and U. S. territories, with only 1,000 professionals holding the CRE credential worldwide. For more information on The Counselors of Real Estate® and how to apply for membership, visit CRE.org. 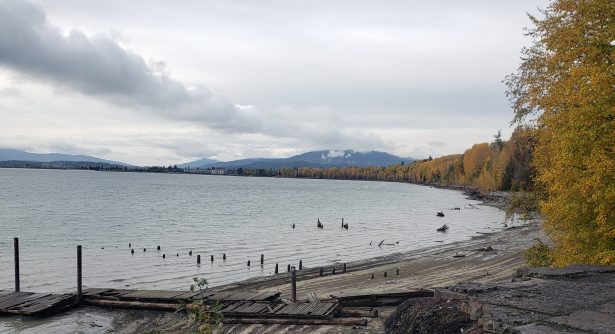