On March 11, CCLR hosted our second Bike Tour of Bay Area Brownfields. For this tour we focused our attention towards the island of Alameda. Program Assistant Sam Hare Steig led a herd of 24 cyclists to three unique redevelopment sites. The group toured each site and talked with the local developers behind the projects.

Alameda Marina was the first stop on our tour. Sean Murphy from Bay West Development gave a presentation about Bay West’s mixed-use redevelopment plan, which includes 760 housing units and 150,000 square feet of maritime and commercial space on the 42 acre site. The vision for the property is to not only create a thriving community within the Marina but to also provide greater access for all Alamedans. The project proposes to set aside four acres of waterfront for public open space and extend the Bay Trail through the length of the property along the estuary that separates Alameda and Oakland. 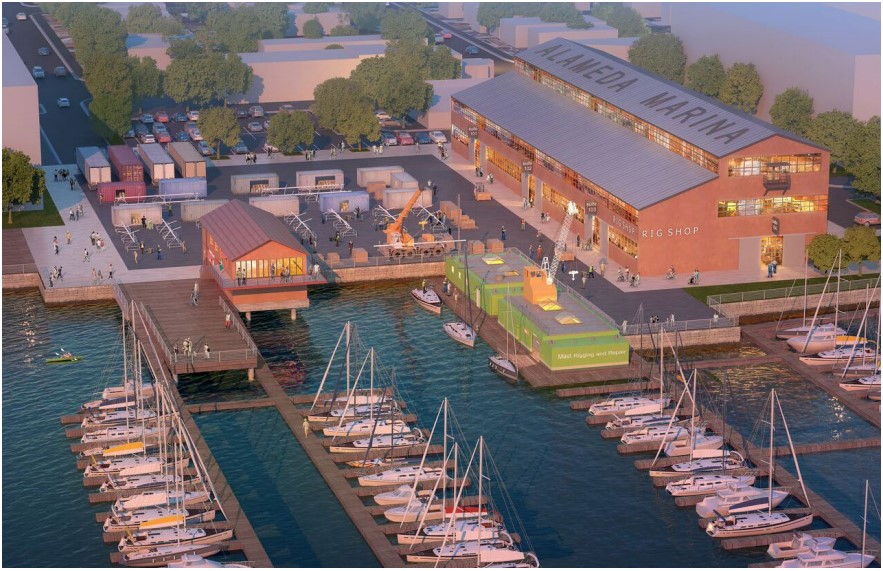 Rendering of proposed maritime and commercial redevelopment on Alameda Marina.

One of the major hurdles for this project is the failing infrastructure at the site, and the funding required for its redevelopment. An example is the sea wall, which will have to be restored and strengthened to protect the Marina against sea level rise.

Bay West Development will present before the Alameda Planning Board on April 23rd for approval of the project’s environmental impact report, as well as the site’s draft master plan. To learn more about the Alameda Marina, visit the project’s website. 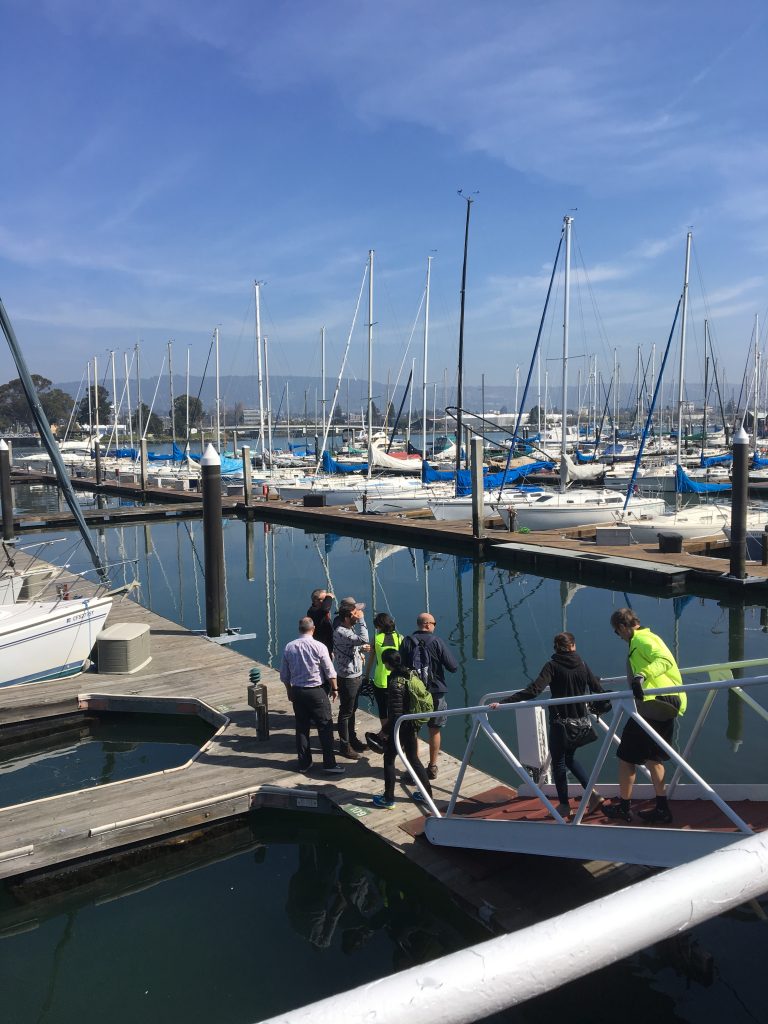 Riders take a look at the sea wall.

Next, the group cycled across the island to Alameda Point (formerly Alameda Naval Air Station) where we met Joe Ernst, Principal at srmErnst Development Partners. He presented the firm’s redevelopment plans for Site A. The parcel is 13 percent, or 68 acres, of the total 509 acres vacated by the Navy in 1996. Site A is important to the redevelopment of Alameda Point for a number of reasons, not least because it will provide a critical starting point for infrastructure, housing, and commercial redevelopment. As shown in the site plan below, Site A is a major mixed use project that will be implemented in several phases. The development includes 800 residential units, 15 acres of parks and open areas, commercial space and a ferry terminal. The first phases of development will be completed within several years, and completion of the entire project is expected by 2030. The construction is projected to create around 2,570 full-time jobs over the span of the project. Once completed, the commercial space is expected to create 1,472 permanent jobs at hotels, specialty manufacturing and retail shops. Combined with construction jobs, these should replace more than 20 percent of the 18,000 jobs lost when the Navy closed the former Alameda Naval Air Station. 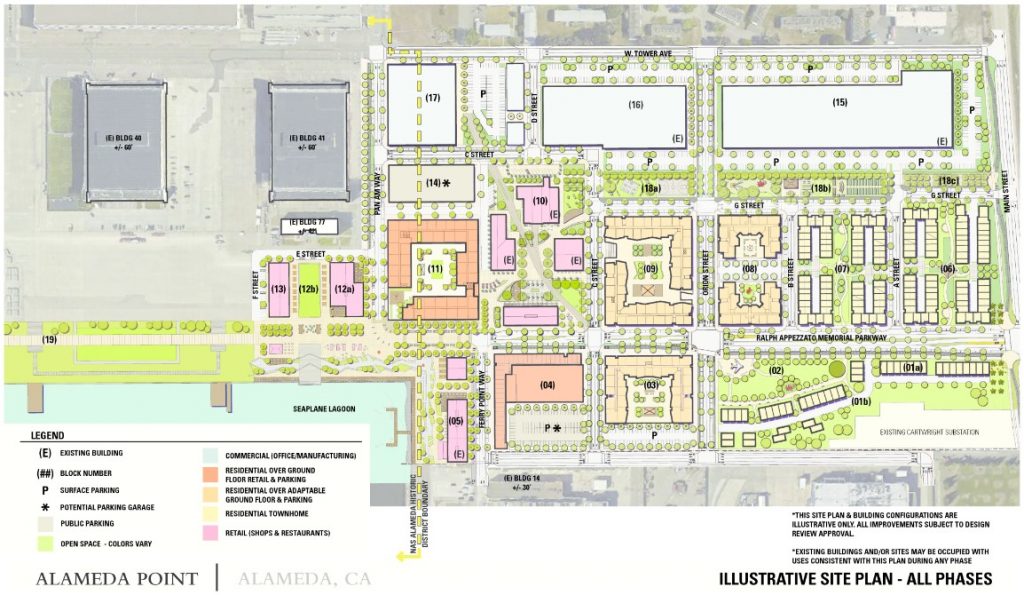 As with many previously used sites, Joe and his team have also had to manage contamination at Alameda Point. Christina Rain, Environmental Engineer at Langan Engineering and Environmental Services, joined us at Site A. She provided insight on various clean-up strategies the project is employing. Christina discussed at length the work Langan has done to close a number of petroleum-contaminated areas at Site A, which were previously used for aircraft testing and overhaul, fuel storage, an oil water separator and approximately 3,000 linear feet of former fuel lines. Christina also discussed excavations that deepened the site’s seaplane lagoon (at lower left in the site plan above) by 10 feet in order to remove sediment contaminated with heavy metals, PCBs and pesticides.

In addition to Site A, Langan also manages environmental considerations in adjacent areas. For example, Langan modeled groundwater flow and developed a dewatering (draining) approach for infrastructure construction. That approach limits movement of a volatile organic compound (VOC) groundwater plume in an area located immediately south of Site A that is still being remediated by the Navy, effectively protecting the remediated Site A from re-contamination. To learn more about Site A, visit the project’s website. 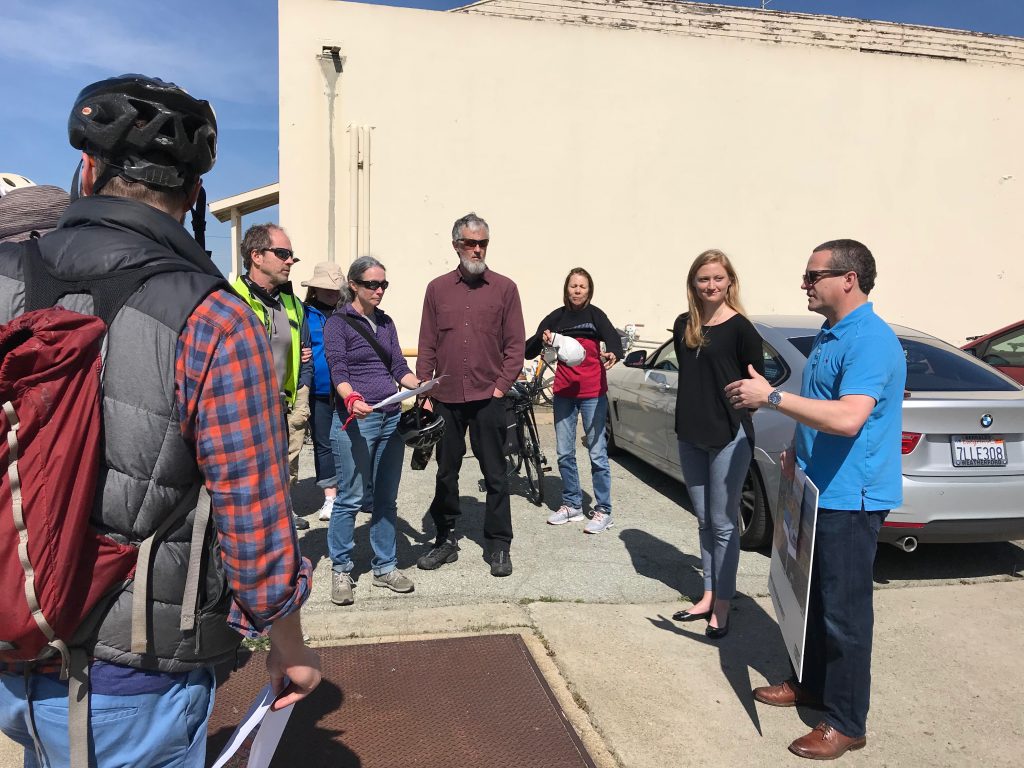 The final site the group toured was former Naval and U.S. Coast Guard housing, commonly referred to as the North Housing site. The 37-acre site contains 282 three and four-bedroom units constructed in 1969. Carmel Partners owns 15 acres of the property, the Alameda Housing Authority owns another 13 acres and Habitat for Humanity owns 2 acres.

Greg Pasquali, Project Manager at Carmel Partners, led the conversation about Carmel’s proposed restoration of their parcel into 146 three-and four-bedroom apartments. Greg noted that remediation was not a significant concern for Carmel Partners on this site, as the top two feet of soil had been removed prior to Carmel’s purchase. The predicted tenants for the redeveloped apartments are families, as the houses are near many public amenities including the ferry, supermarkets, sports fields and a school. Of the three redevelopment projects we toured, the North Housing site is projected to be completed soonest, with residents moving in potentially as soon as the spring of 2019.

Overview of the North Housing site. The Port of Oakland and downtown Oakland are visible in the background, across the Alameda Estuary. 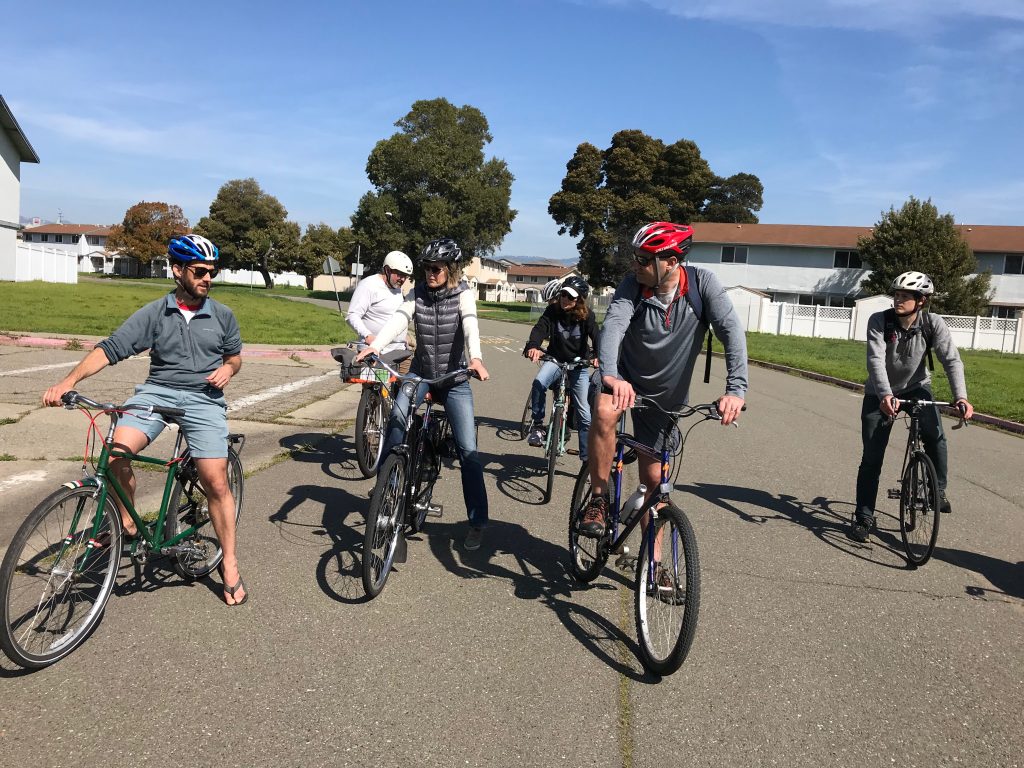 Greg Pasquali (far left) and some of the cyclists touring the North Housing site.

The cyclists on the tour came from a variety of different backgrounds, providing a diverse array of perspectives and lively conversation. We had individuals from real estate agencies, local bike/walk advocacy organizations and others just looking for a relaxing and thought-provoking ride. Many of the riders were residents of Alameda (both owners and renters), which often directed conversation towards the impact these local infill projects would have on easing the region’s housing crisis, generating jobs and linking both housing and jobs with transportation.

Connecting communities by building housing near jobs and in places accessible to multiple forms of transportation is at the heart of smart growth and brownfields redevelopment. No silver bullet will solve the Bay Area’s housing crisis, but thoughtfully planned and connected infill development is a critical important component of a larger, more durable solution.

Check out our facbook page for more pictures of the tour: https://www.facebook.com/pg/LandRecycling/photos/?tab=album&album_id=101…